Phil and Sarah from Fieldcraft Mobility left this morning to head to Portland where they are going to execute a bug out plan that they have been preparing and planning for over the last couple of weeks in order to help you learn, develop, and prepare a bug out plan of your own. They are leaving from Portland, OR outside the federal building tomorrow morning and should arrive at their destination over 600 miles Friday evening. We're excited to see how this plays out and hope you are too.

If you want to experience this with us we'll have some of the Fieldcraft team at the destination in Montana and we have some space for you to join us as well. 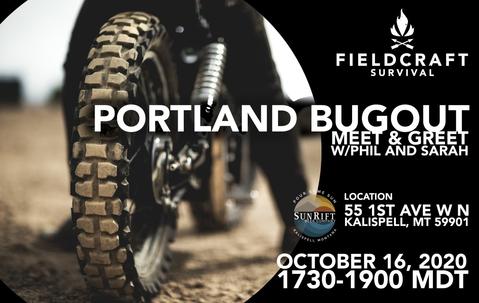 Objective: Their objective is to execute a bug out plan on dirt bikes escaping civil unrest/riots in an urban environment and traveling over 600 miles to a safe rural location.

What: Phil and Sarah arrive in Montana after bugging out from Portland

If you want to follow along we'll be posting some updates along the way. Check out our Twitter, Fieldcraft Instagram, Fieldcraft Mobility Instagram, and Youtube pages for updates! Here's a little more about what took place to get them ready for this trip.

Bugging Out is something that has been discussed and refined a lot in emergency preparedness and survival groups. You often hear of a bug out bag that is supposed to save your life in a disaster. Many people build up stockpiles of gear and modify vehicles in the event that they ever have to get out of town quickly because of some disaster or threat to their livelihood. There are many reasons why someone might need to bug out. Natural disasters such as Hurricane Katrina led to the emergency evacuation for over 1.5 million people. People were forced out of their homes with just a bag or two that they could grab with short notice and left their homes behind only for them to be destroyed. Every year hurricanes and tornadoes force evacuations. Wildfires have raged all over the West this year forcing many to evacuate their homes. Earthquakes, mudslides, blizzards, floods, and other disasters could all hit depending on where you live. We've also seen civil unrest with protests and riots tearing apart many cities across the country with chaos and violence. Economic collapse, a pandemic from a disease that spread across the country or world, and many other emergency situations could force us to need to leave our homes for a period of time to somewhere safer. Often this is for short periods of time - a few hours to several days to weeks. In some extreme cases, there's no house to go back to. If 2020 has shown us anything, it is that taking care of our own preparedness for survival is of paramount importance. At Fieldcraft Survival we strive to help you become more prepared for whatever disaster or challenge you face. Knowing that there is a large population of people who are making preparations for worst-case scenarios, we wanted to help people understand what it would actually take to do it successfully. So we set out to implement a bug out plan with what we had available in our warehouse or local stores.

Bugging Out vs. Bugging In

Whether bugging out and leaving your home is the right choice or staying home and utilizing the resources you have there is a question that is very dependent on the person and the specific survival situation you find yourself in. If you can stay at home that is often safer since you will have your full stock of emergency supplies including food, water, guns, ammo, some of the best shelter you could ask for in a roof over your head, plus all the gear you have prepared for an emergency and for your normal living. Instead of throwing your gear in a bag and heading out, you have your full setup. But there comes a point when staying home is no longer safe or feasible. For the reasons mentioned above, you might be forced to evacuate because of a natural disaster. Rioters might be storming neighborhoods nearby leaving you with the difficult decision to stay and defend yourself and loved ones or bug out and find a safer place, or the county could experience blackouts where food spoils and electricity or even water ceases to be supplied. At the end of the day you'll need to decide if you are better off staying at home or leaving, but if you choose to leave you'll need a plan and you'll need to know how to best implement that plan to ensure success and safety.

When we hear of bugging out plans we often hear of the gear and equipment needed, but missing from that is often the planning process of where to go and how to get there. Our goal is to fill in these missing pieces so you can have a better plan for survival in various crisis scenarios. We decided to do this specific event bugging out on dirt bikes leaving from Portland, OR where the rioting has been among the worst in the country. Once we knew where we were bugging out from, we needed a place to go. Choosing a location is dependent on many factors. Ideally, you have a piece of property that you can go to that is far away from a large city and you can have supplies stocked. However, most people don't have access to a place like that. Public land is an option but will require you to be more flexible as other people will also be trying to survive on public land close by. We chose a location that we felt we could get to reasonably safely and would be far enough from the danger with few people. In the end, we chose Whitefish, MT as the location we would be bugging out to. Using bikes would allow us to be more agile, especially getting out of a large city with traffic, potential barricades, stairs, sidewalks etc, but would also force us to be more selective in our gear choice as we will be limited in what supplies we can bring on the bikes to sustain ourselves. We needed to get creative as our destination is over 600 miles from Portland. We set out to figure out how to get enough food, water, fuel, medical supplies, survival kits, shelter and tools, warming layers, and other supplies that would be needed to get away from the danger in Portland to our safe destination. 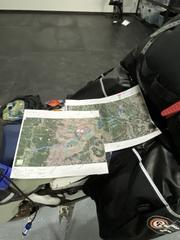 Knowing that in a real-life bugging out scenario, gas stations would most likely be shut down, drained, or simply way too over-crowded with citizens who could act out of desperation in violence to sustain themselves, so we had to figure out how much fuel we would need for our bikes to make the trip. We wouldn't be able to make the full trip on a single tank, so we looked at ways to increase our fuel capacity. Not just fuel, but in order to make the full trip with the limited space in the bags on the bikes, we needed other supplies that we couldn't carry. So we decided to bury a cache on public land in a place that would be close enough to get to but far enough away from the danger of the city riots. This is something that can be done if you plan and prepare properly. Then we planned a route that would help mitigate some of the danger by avoiding cities and towns, major highways and choke points.

Once you know where you are going and how you are going to get there you can start filling in other pieces of the puzzle. Who are you taking, what are you taking, how are you taking it, and who do you need to communicate with? Having a good comms plan is essential since you never know what issues you might run into and having a reliable way to communicate might help you get out of a sticky situation. Not only might cell phones not work because of infrastructure failure, but there's also a good chance that you travel through areas that don't normally have cell phone coverage just based on the nature of the place you choose to bug out to. This plays into navigation too as your cellphone needs charging and reception to navigate (unless you can download an offline map), but a secondary means of navigation such as print offs or a map book are highly recommended.

Carrying Out Your Bugging Out Plan

As you develop your plan, these things that we've discussed might be slightly different for you compared to another person. These are things you can learn by practicing your plan of bugging out. Going over a specific scenario and then actually implementing that plan can be a fun and informative way to work out various problems and eliminate each threat that you can beforehand, so you have less to panic over in the event that you actually need to bug out and execute your plan. You might find that the food you have packed isn't as substantial or even as storable as you might need, or that you need to practice communications in the middle of the mountains with more obstruction to ensure your reach is effective. Other lessons can be learned to help you prepare your bug out plan and up your odds to survive when many others won't. This can be the difference between a guy who thinks he has a good bug out plan that won't work in real life and someone who actually lives the life of emergency preparedness. We're excited to bring you lessons and products that we learn and develop by going out and actually executing a bug out plan. As we've learned, disaster can strike at any time and we need to be prepared for whatever that may bring.