Windows down, radio up on the highway with the soothing hum of the vehicle with some beefy AT tires on the asphalt on the way to a weekend adventure...We can not always get there overnight, or to some wooded quiet camp ground as much as we like. On more than one occasion we have been forced to take refuge for the night at a roadside rest stop. Oftentimes this means camping out with some of the very things from which we intend to escape. Blaring music, the sound of rushing cars, ambient street light, and that guy who was honking at you at exit 125 giving you a thumbs up. Nevertheless here you are pulling into a rest stop for the night.

From military training, it has become second nature to ensure situational awareness or "SA" in all circumstances and environments I go, including in a vehicle. This vehicle situational awareness includes the same mentality you would need elsewhere but applied to circumstances with the vehicle specifically. I often sit in a park on the weekend or even walk through the store and see the whole world head down plugged into their phone or iPod completely unaware of their surroundings. This is what we call a soft target. Someone who lacks situational awareness and is vulnerable and oblivious to any danger. Whether crossing borders in Central America or sleeping in a truck stop for the night in an unfamiliar setting on the road, far from home you need to be a hard target. So how do you be a hard target? Somewhere like a rest stop or even a motel on the way to your escape are prime opportunities for people to attempt to exploit your vulnerabilities. Here are a few steps you can take to increase your situational awareness and keep yourself and your gear safe.

Location: When possible, always park your ride somewhere well lit and in eyesight to a store top camera or the majority of foot traffic. A vehicle that is out in the open with other nearby vehicles that offer multiple opportunities for a thief to be seen is one less likely to be messed with.

Gear: Whenever I have the truck loaded down I always make sure that I run some simple cables or bike locks with a lock through and around my gear on the exterior of the truck. Don't be fooled, this is only a deterrent, but oftentimes that is all that is needed. There is no such thing as a perfect platform so adding layers of deterrents is the best option. Be sure to store expensive items such as camera equipment, laptops, iPad, wallets, and purses inside a container or under the seat while parked. I try to do this at all times, not just overnight somewhere foreign. And of course, remember to lock the doors....without the keys inside.

Communications: I always ensure that I have a good system for communication with me and that they are fully charged. Whether it be a cell phone under my pillow or a radio when reception is not the best, communication is a top priority in the case of any emergency. Having the capability to communicate in an emergency can expedite getting the help you may need. It is also wise to inform someone whether friends or family where you are staying or exploring.

Personal Protection: Not everyone or every situation needs a firearm or a blade, but if you are responsible, knowledgeable and licensed, carrying one is a 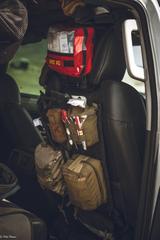 possibility. Other options include pepper spray, a taser or something as simple as a bat. Even bringing your dog along isn't a bad idea! Once again it is more for an escalation of force and deterrent than to be actually used. I also obviously always recommend having medical gear on hand in case something does go down.

You don't need to have an armoured vehicle...just having good vehicle situational awareness can protect you from attack. Being a hard target is about having greater awareness so you can stop a potential incoming threat before it starts and reduce the likelihood that someone could pull one over on you. More often than not all that is needed is passing the first glance.

At first glance this nice vehicle is parked in a well lit heavily exposed area, everything seems to be locked down, I can't see anything valuable inside the car, the driver just put a baseball bat inside his roof top tent before calling it a night. Probably shouldn't mess with them. Just a few tips I follow to keep safe on our travels near and far!

Austin grew up in the rural mountains of North Carolina, where he learned at an early age the importance of preparedness and homesteading. At 17, Austin began the Emergency Medical Technician program and quickly found his passion for serving his community. Austin progressed into the Paramedic program, and then furthered his career as a Rescue Technician, Firefighter, and Search and Rescue specialist. After a few years, Austin had a strong desire to peruse the calling of the military by joining the Air Force where he deployed, supporting the CJSOTF(Combined Joint Special Operations Task Force) with a Combat Search and Rescue team. Austin’s sound mind and experience in emergent critical thinking make him a vital asset to our instructor team. Austin now resides in Heber City, Utah where he works with the Local Sheriffs Department as a Search and Rescue Specialist as well as Fieldcraft’s Media Director, Survival, Medical and Firearms instructor.